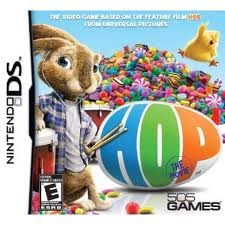 We were given the oppertunity to review this new DS game “Hop” from the new movie.
ok, without seeing the movie, and from what I was told from my 7 & 9 year old from them playing the game the story is:
the Easter Bunny runs away from home, his dad is trying to find him, and meanwhile he gets hit by a guy named Fred in a car.
Fred then has to go around and collect jelly beans.  The jelly beans are used as health in the game.  The top screen shows a chocolate bunny that looks like it’s been bit each time you get hit, but by finding chocolate bunnies in the game it restores you back to normal.

Fred shoots people with candy, teddy bears, gadgets to open doors as he’s trying to collect the jelly beans for EB- (aka easter bunny) who is in his backpack.

There’s Ninja bunnies that are trying to surround the EB and if too many get around him then he will hide in the backpack and you lose that level.

My kids LOVE this game, they say it’s a blast even though they say level 2 is hard and they can’t beat it yet.

Here’s the press release on the game:
Agoura Hills, CA—March 31, 2011— Easter baskets will have more than just candy this year! 505 Games, a global interactive game publisher, announced today that Hop: The Movie Game is available now exclusively on Nintendo DS™ in stores everywhere for just $29.99 USD. Hop: The Movie Game is a top-down action adventure game that brings many of the locations and characters from the movie to life in an interactive and entertaining setting that’s perfect for gamers of all ages! The game is based on Universal Pictures and Illumination Entertainment’s upcoming live action/CG animated comedy Hop, which opens in theaters on April 1, 2011.

“Hop: The Movie Game is the ideal basket-stuffer for anyone on your Easter list, and with dozens of missions, varied gameplay and colorful graphics, will last much longer than a chocolate bunny,” said Ian Howe, president of 505 Games. “It features the same hilarious comedic sensibilities of the film, and since it’s on the Nintendo DS, it’s the perfect game for the little ones to play over spring break and on any Easter road trips.”

Play as Fred as you help the Easter Bunny’s teenage son, E.B., save Easter from a fluffy coup d’etat led by Carlos and his fellow chick workers! Hop your way through the Easter Bunny’s top-secret candy factory on Easter Island, solve puzzles and sugar shock your enemies as you turn them into delicious chocolate treats. Play through various mini-games and game modes, including helping E.B. realize his dream of becoming a famous rock-’n’-roll drummer!

Hop: The Movie Game Features Include:

Play through actual locations from the film, including Hollywood and Easter Island;

Tons of mini-games, including Whack-a-Bunny, Bowling for Candy and the epic Easter Egg Hunt.

This error message is only visible to WordPress admins

Make sure this is a valid channel ID and that the channel has videos available on youtube.com.

BACK TO SCHOOL SPECIAL- All curriculum & home school related items are 60% off for a limited time. Dismiss